Julia Sick (ESR3) and her team from of the University of Florence (UNIFI), Prof. Erminio Monteleone, Prof Caterina Dinnella, Dr. Lapo Pierguidi, and Dr. Sara Spinelli, published the paper named “Development of an emoji-based self-report measurement tool to measure emotions elicited by foods in preadolescents” in the international journal Food Quality and Preference.

The research was an integral part of Julia’s PhD work with the aim to develop a tool to measure emotions elicited by foods in preadolescents. The information given by emotions can help to better understand consumer’s food preferences to improve product performance and assist in the development of new products targeted at children. However, there is a lack of child-appropriate methods in sensory- and consumer research, especially related to emotion measurement. Recently, emoji evolved as an attractive instrument to measure emotions elicited by food. In fact, emoji are supposed to simulate facial expressions that convey specific emotions or other situational meanings.

The research involved five studies with 454 preadolescents attending primary and secondary school classes based in the Florence area, Italy. Study 1 focused on establishing a list of emoji relevant to describe food experiences in preadolescents. Four studies were conducted to better understand the meaning of food-related emoji (resulting from Study 1) using quantitative and qualitative approaches. Based on this, an emoji-based self-report measurement tool to measure emotions in response to food products was developed. 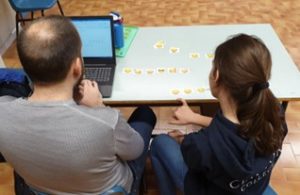 The findings resulted in 17 emoji pairs associated with specific linguistic semantic and dimensional (valence, power, and arousal) meanings. The emoji were paired in two to facilitate the interpretation by the respondents and each emoji pair was associated with a set of two representative emotion words. The tool can be used in two suggested response formats: a) as the Check-All-That-Apply Emoji Pair Questionnaire and b) the Emoji Pair Rating Scale (see figure below).

Julia’s current work investigates the discriminant ability of this tool over a wide range of food products. The questionnaire will allow for a better understanding of preadolescents’ affective responses to food and can be used in food innovation targeted at preadolescents to promote healthier food behaviors. 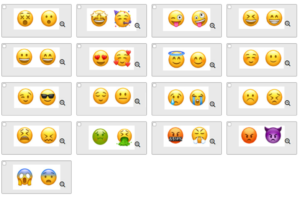 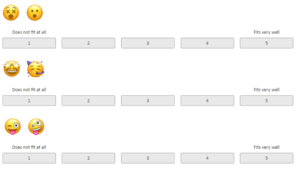